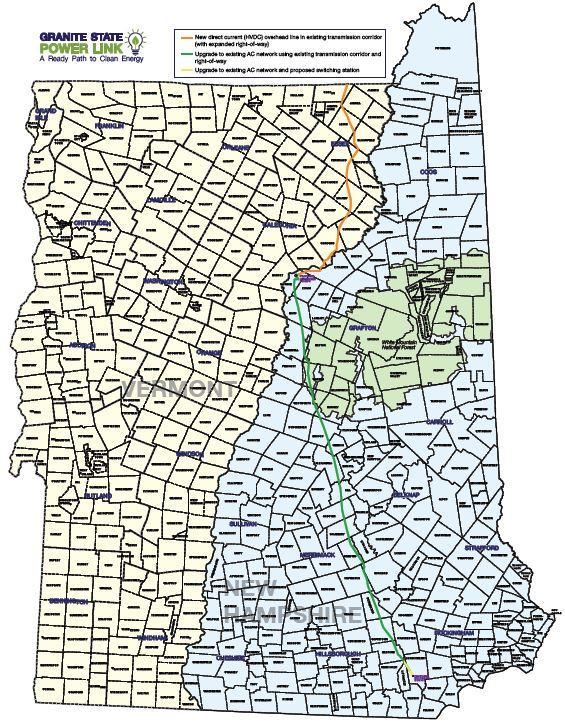 A new utility project from National Grid would transmit renewable energy from Quebec along 114 miles of power lines in New Hampshire.

Utility company National Grid says it wants to build a new transmission line that would bring 1,200 megawatts of renewable power from Canada into New England. The major new project would take a different route than the controversial Northern Pass proposal put forward by Eversource.

National Grid’s new plan, called the Granite State Power Link looks to harness wind and hydroelectric energy in Quebec, and transmit it along 58 miles of line in Vermont. It then would cross the Connecticut River into Littleton, New Hampshire, and continue for 114 miles, before terminating in Londonderry.

The project, which has a $1 billion price tag, would require 6 miles of new transmission lines in New Hampshire, although National Grid says those lines would be built along existing utility corridors. The company says it plans to use 108 miles of existing transmission towers, which would be retrofitted with new lines.

“Our customers need access to cost-effective energy, cost-effective clean supply, and they need it in a way that is …not very environmentally impactful,” says Joe Rossignoli, project director for Granite State Power Link.“So we think that this project using existing corridors and networks delivers both of those.”

National Grid says the project would create 600 construction jobs in Vermont, and approximately 1,500 jobs in New Hampshire, and the company hopes to finish the project in 2022, but first must get approval by state and federal regulators.

Read the rest at NHPR.org